The “Ferrata Maurizio” is located on the Anticima Est (1900 m) of Monte Croce, in the Alben massif.

The north face is characterized by the presence of two majestic spurs, cut through by deep colouirs which lead to the pyramidal summit. It is a wild and not very popular side, given the difficult access conditions.

The via Ferrata covers such a face, by following at the beginning the big spur on the right-hand side, and then going straight up to the summit. An easy final ridge brings to the crossing with the normal route which reaches the summit of Monte Croce from the Forca Larga (CAI itinerary n. 501). 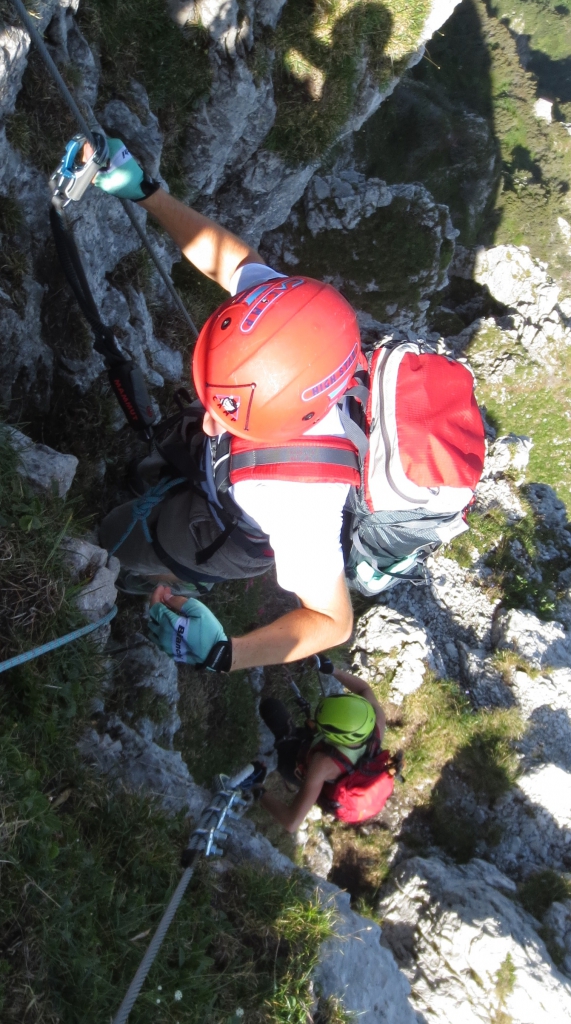 The via Ferrata can be taken on with a complete security equipment only: Ferrata kit, helm, gloves, and trekking shoes.
This itinerary can be faced by experienced people only or by those accompanied by a mountain guide.
The fixed cable can be used as aid to climbing and additional climbing aids, such as iron rungs (stemples), pegs, and carved steps, are often provided. Nonetheless, the safety on the via Ferrata depends on the behavior of the single person only.
The decision to undertake the via ferrata implies a complete responsibility of the person who makes such a decision, regarding both accidents, which could eventually occur, and damages, which could be caused to other people.
In case of accident, the builders and the municipality of Oltre il Colle and Serina decline any responsibility.
Moreover, each ferrata equipment is subject to deterioration, due to both use and weather conditions, not assuring its complete efficiency.
We kindly invite the visitors to inform the mountain guides of Oltre il Colle about anomalies, which could be detected along the way.
The via ferrata represents the only access way to such a face. It is therefore essential never to abandon the route, to avoid the risks of getting lost in the surrounding couloirs. Moreover, it is strictly forbidden to abandon garbage, damage the flora, or disturb wild animals.

Walk up the meadows on the left-hand side of the ski-lift, until one gets to the large path which follows the stony buttress protecting the lifts. Follow the path up to a small plain where it is possible to safely wear the ferrata equipment. Then follow the path which crosses a small drain and takes to the starting ramp of the via ferrata. (about 30 min. from the parking space).

People who intent to take on the via Ferrata must consider: